Through the last decade, we’ve noticed a crop of emerging personalities in the practice of sculpting with raw paper. Folding, cutting, glue-sticking and rolling- it’s very easy to understand the basics of creating sculptures out of art, however why do we marvel at several of the more recent paper sculptors and their uniquely unbelievable creations? 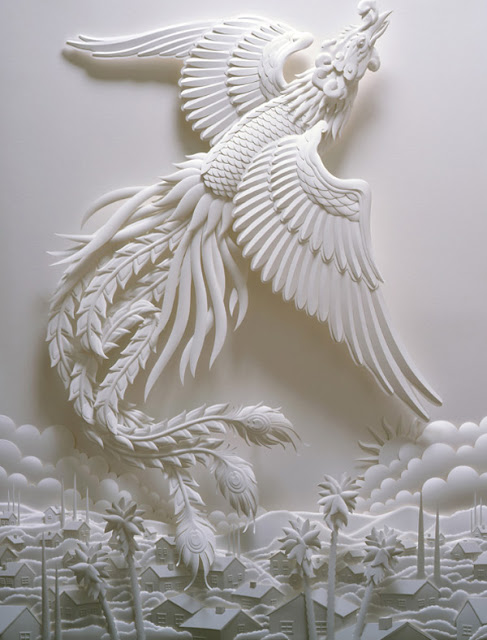 Origami is probably one of the best known forms of paper sculpture, followed by paper cut-outs, folding lanterns and silhouettes. In the past few months, we’ve observed artists from every corner of the globe use a combination of the time-tested basic techniques to make artworks that have an impact the first time around. Cutting and folding techniques have evolved,just like the piece of paper art you see above. A modern combination of craft techniques and design styles give way to a new breed of assemblage-art that the world has yet to appreciate in full. We believe 2012 is a year where new and upcoming artists will bedazzle the art world with exciting concepts that will be both bold and innovative.

Ann Arbor’s own Sharon Que is an American hybrid artist. While being a patron of music and specializing in violin restoration and repair, she finds herself creating a number of assemblage sculptures in her spare time. With her musical background in mind, Sharon bridges the gap of media and goes even further with her pieces. She tackles imagery in her work by mixing forms pertaining to issues of spiritual, secular and mathematical relation. The Detroit Institute of Arts acquired and displayed some of her works as well. She’s had various solo exhibitions in Ann Arbor, Birmingham, and recently in Fort Masin Center (San Fransisco) in 2005. 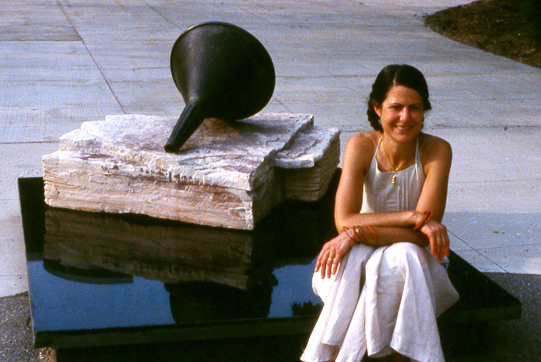 Sharon’s deep, yet industrialized compositions speak of her mind’s conversation with the world, addressing her own thoughts as a person facing every issue we all face today in a modern society. Some of her public sculptures blend well in their own hybrid forms due to Sharon’s knack for texture manipulation. Combining smooth surfaces with natural roughs and concrete allows one to fully appreciate the contrast within her artistic works. In 2008 Ann Arbor featured some of her works at the Gallery One in Washtenaw Community College together with some works by Tom Phardel.

Six sculptures were designed by Scholz & Friends for the 2006 football world cup (FIFA). These six sculptures were set in Berlin and made a part of Germany’s Idea campaign; “Deutschland – Land der Ideen”, and were named “The Walk of Ideas”. They were put up for a certain period of time, but made a big impact on tourists who visited the nation for the big event. Among the sculptures, there were many that conveyed thought, idea and innovation throughout the country’s history. These sculptures cost about 300,000 euros each from start to finish, and were made with a new kind of material called Neopor. The sculptures consisted of these designed subjects: A series of books with names of German poets and writers, a giant tablet signifying the milestone of medicine, a few huge musical notes to symbolize bach, beethoven and the rest of their musical prodigies, a silver car signifying contributions in the automobile discovery, A modernized foot ball boot, and Einstein’s equation: E=mc squared. The feedback from the worldwide community was simply astonishing. The British Times, CNN and many other coverage media companies broadcasted positive clamour for the overall success of the campaign.

They also said that Germany was turning away from pessimism and starting to convey the fact that it was lead by people with vision and a sense of national innovation.The only downside to this series of sculptures was the fact that some people complained that their artistic value was compromised by the “platitudinous advertising”. Examples of these complaints were the fact that the football shoes had stripes that pertained to the Adidas brand and the silver car looked almost exactly like the new Audi model of the time. Some people thought that corporations were behind these seemingly innocent discoveries within the artworks. Despite this, the event was a good thing to have for Germany, and the world appreciated this well-prepared acceptance of the 2006 football world cup. For a land with its history, Germany has really grown into an excellence of creative minds and great thinkers. (Picture Accreditation: Walk of Ideas (Berlin) + Photography by Lienhard Schulz)

As an abstract expressionist sculptor, Mark di Suvero creates his bold, contemporary pieces in a diversity of rigid and curving shapes. Taking inspiration from prime contours and basic elements, he uses heavy metal and steal beams to create arcs, bends and complex shapes that constitute the foundation for much of his art portfolio. Aside from this, another trait that defines Mark’s artworks, are the fact that many pieces within are kinetic. Swivels and rotatable objects are a common find in his designs, giving them a great capability for motion and interactivity. Mark studied at several universities, such as Berkeley, and the Santa Barbara University in California. He was also a recipient of the (year 2000) International Sculpture Center Lifetime Achievement Award.

As an avid member of the art community, Mark also founded two galleries; Park Place and SoHo Contemporary Art. Aside from these establishments, his three studios in Long Island, Petaluma, and France are all reputable facilities that work round’ the clock to create his bold gigantic masterpieces. Mark’s aesthetic tendency to make use of large elements like railroad tracks and heavy I-beams makes it difficult to construct art at a normal backyard studio, so he uses these three professional studios at their locations to make his metal creations from start to finish. Recently, he published a book entitled Dreambook which is a compilation of sculptures, ideas and poems. It is highlighted with vibrant colors that reflect on his personal taste.

We all know that factories and machinery have the capacity to produce perfect grade objects with flawless surfaces, spotless coats and pinpoint proportion. We are also aware that human beings are not robots, nor are they precise, routinized assembly lines. What happens then when we pit man against machine in the world of art?

When you buy an artwork, do you look for every blemish, every tiny irregularity that somehow looks as if it shouldn’t be there? If so, then maybe you’re looking in the wrong direction. Fine decor fits the description on the flawless collection piece, but art for many people is able to transcend this scrutiny of physical quality. Art is humanistic in nature, and is on a caliber of thought and emotion unknown to mass produced works. It really all boils down to what you’re looking for; beautiful objects or beautiful stories. Every work of art is exactly a personal story; a piece of a person’s life and time. Art survives and thrives even through the industrial and digital ages because of its organic and narrative nature. It does not need to be a porcelain doll every single time, because it ought to reflect on the presence of humanity in the world. Art creates a perfect story within every imperfect shape it possesses.

Many people always say that the mind of a child is like a sponge. It’s very absorbent of any strong information because at this stage, it is crucial for the brain to gain new cognitive function so as to further human development. The recognition of art is no exception. What catches a young person’s senses first is usually subconsciously registered as one of the primary traits of dominance. Bright colors, deep contrasts, large masses of form & striking patterns- these are some of the elements that visual artists can utilize to capture the attention of the younger generations.

This type of advice can be very easily related to painting, but when you apply it to the artform of sculpture, what aspects other than physical size can one notice? Well, balance is definitely something to consider, have you ever seen a sculpture that looks like its free standing off a pin-sized point? Or an artpiece that looks so dense in its material, but is stationed to look as if it’s flying?

Imagine the kind of sight that would bewilder you to the point of asking the question: how did he do that? Or how is that possible? Younger people are drawn to things that are both striking in theme and unexplainable in existence. It’s not a mystery to know what to make, it’s a mystery itself that you have to create. Mysteries draw attention.

Ankara’s Resim ve Heykel Müzesi (The State Art and Sculpture Museum) was a brainchild of Mustafa Kemal Atatürk, the first president of the country. Its semi-regal architecture came from the design of Arif Hikmet Koyunoğlu in 1927. The building originally exhibited a lot of 19th century art from the country’s artist community. The modern museum now restored and declared re-open to the public is a heritage center that creates a doorway into Turkey’s past and present artistic personalities. Along with an extended library dedicated to the plastic arts, the museum also features spaces where guest exhibitions can be held as well. 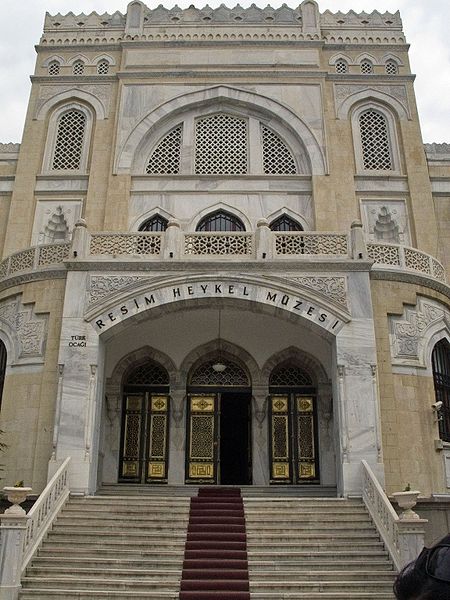 The restoration of the building gave it prime conditions to create a sound environment for the preservation of every artwork. The architecture and settings prevent problems due to temperature, humidity and the like. Aging damage can also be repaired within the museum grounds at a special restoration area specifically tasked for this purpose. The entire complex is laden with controlling systems that also signal for fires. Workshops that the museum currently offers are vast in number and are mainly about sculpture, painting, traditional printing, ceramics and the ornamental arts. The level of workshops may also vary, as people have demanded to create two levels of professional and beginner.

The Turkish museum holds many multi-cultural and multi-platform exhibitions in cooperation with foreign countries. Three of its galleries are reserved for periodical exhibits to showcase he work of foreign artists, and permanent pieces from the Turkish corner will be traveling to be displayed in other countries as well.

Kinetic refers to something in motion, so this form of sculpture can be defined by its unique aspect of integrating motion into its beauty and function. In some societies, both sound sculpture and light sculpture are also considered as kinetic art, but traditionalists refer to the term only when they pertain to concrete masses in motion.

Two popularized examples of kinetic sculpture are the mobile and the fountain.

First off, the mobile is a type of kinetic sculpture that makes use of the properties of equal balance. Weight and density are taken into detailed consideration when creating works in this field. Most mobile sculptures have separate elements hanging or balancing by some point of reference. This set of elements are set in motion by a slight force of wind or air current. Alexander Calder is one of the most famous and acclaimed mobile artists of the 19th century and was best known for many of his playful depictions created by crafting metals into mobile sculptures. The mobile is also a very popular teaching exercise used to instruct art students on the aspects of balance and composition.

The fountain is a type of kinetic sculpture that associates itself with a flow of liquid. Most common fountains today are used in a grand scale as center pieces in many hotels and resorts, but there are several artists who still practice the creation of solo or small fountains, such as the japanese bonsai-garden sculptors that make use of controlled water flow in their living artworks.

The motion-creator for any kinetic sculpture can stem from many different sources of energy, such as wind and water power, electrical power, steam power, mechanical (or human) power, or even using clock work. Historians argue that the very first kinetic sculpture was made by Marcel Duchamp. A piece entitles Bicycle Wheel in the early 19th century. At around the same time (but a bit later), Naum Gabo and Antoine Pevsner created their Realist Manifesto in Moscow. Kinetic art was finally  included as a novelty in the compilation.